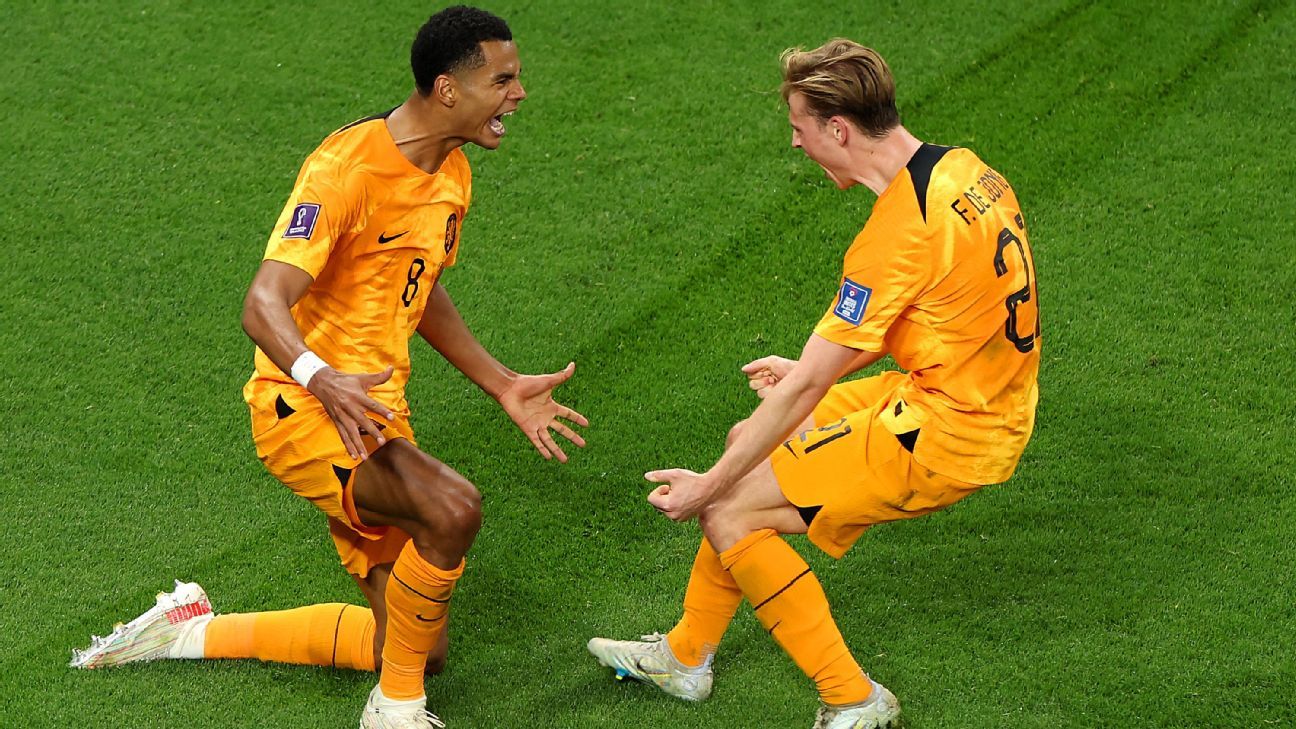 DOHA, Qatar – The Netherlands set up a potential Group A decider against Ecuador on Friday by opening their World Cup campaign with a 2-0 win against Senegal at Al Thumama Stadium.

Goals from Cody Gakpo and Davy Klaassen in the final five minutes ensured a comfortable margin of victory against the African champions, who now need to beat host nation Qatar in their next game to keep alive their hopes of a second-round berth.

Cody Gakpo lived up to his billing as one of the most sought-after young strikers in Europe by netting 2-0 for the Netherlands in their Group A opener against Senegal. PSV Eindhoven striker Gakpo was close to a move to Manchester United in the summer and remains on their radar ahead of the January transfer window. And in his first match on the World Cup stage, the 23-year-old ensured that Louis van Gaal’s side got off to a winning start and gave themselves the upper hand in the battle to qualify for the second round as group winners.

– Hamilton: PSV star Gakpo ready to shine for the Netherlands in the World Cup

With the game seemingly drifting towards a 0-0 draw, Gakpo arrived late in Senegal’s penalty area to head Frenkie de Jong’s cross past a hesitating Edouard Mendy in the African champions’ goal. Gakpo had been quiet during the match after being deployed in a deeper role by Van Gaal and the Dutch struggled to make an impact against a Senegal side without their injured talisman Sadio Mane. But with the group winners set to face Group B runners-up – likely Wales or the USA – winning the group means avoiding a potential clash with England, so the three points could be crucial for the Dutch, who went 2-0 down in the dying seconds of stoppage time when Davy Klaassen capitalized on another Mendy error.

As for Senegal, despite creating some chances in the second half, they failed to suggest they could become the first African team to go past the quarter-finals in Qatar. Their clash with Ecuador next Tuesday is set to be the game that decides their fate.

2. No Sadio Mane, no party for Senegal — And the Dutch will soon be going home, too

We already knew Sadio Mane would be a big loss for Senegal, but the injury that has forced their record goalscorer out of Qatar 2022 has left Aliou Cisse’s side toothless in attack. Senegal have simply no threat going forward without the Bayern Munich striker, with Watford’s Ismaila Sarr and Salernitana’s Boulaye Dia nowhere near the level of their star team-mate. They are a team full of talent and winning pedigree, having won this year’s Africa Cup of Nations, but without a reliable striker, Senegal will not trouble the better teams in the tournament.

And the same goes for the Netherlands, who would be a contender to go deep into the competition if they only had one striker comparable to their recent greats like Robin van Persie, Ruud van Nistelrooy and Marco van Basten. Louis van Gaal’s side have world-class players further back in Virgil van Dijk and Frenkie de Jong, but their attacking players are a level below what the Dutch really need to succeed in Qatar. Memphis Depay, who started as a substitute, was joint top scorer with Harry Kane in the European part of the World Cup qualifiers, but the Barcelona forward will not trouble the top teams, nor will the likes of Luuk de Jong and Wout Weghorst.

Cody Gakpo can, but PSV Eindhoven can’t carry Dutch hopes on their own, even if he won this game with his late header. In all likelihood, the runners-up in this group will face England in the second round, with neither Senegal nor the Netherlands strong enough to beat Gareth Southgate’s side.

3. Where are the missing fans?

In the days leading up to the start of the World Cup, the late scramble to buy tickets for matches was so intense that there was minimal availability for only six group matches. According to FIFA, almost every ticket was sold and we were set to full stadiums for every game. But Al Thumama Stadium was nowhere near full for a clash between the African champions and one of Europe’s best-supported teams.

The official attendance was announced as 41,721 — not bad for a stadium listed in the official World Cup guide as having a capacity of 40,000. So where were all the fans and why so many empty seats? During the opening match of the tournament between Qatar and Ecuador, the mass exodus of supporters early in the second half was one of the most surprising outcomes, raising questions about the type of fan who buys tickets and turns up.

They may be locals who have been intrigued by the tournament but have no real passion for the game, hence their early departure from the Qatar match, or they may have just bought tickets and decided not to attend. Some ticket packages required fans to buy a batch of tickets to games they might not even want to attend, but they had to in order to make it to the game that mattered most. But whatever the reason, it is bad for the WC to have such appealing matches played in front of banks of empty seats. Perhaps that’s why the incessant noise of the Senegal fans’ band was so loud — the echo around the half-empty stadium made it incredibly noisy.

The Dutch goalkeeper was making his international debut but the Heerenveen number one showed no signs of nerves during an outstanding performance that was as crucial to victory as Cody Gakpo’s goal. A save at the near post from Boulaye Dia in the second half was particularly important.

The World Cup is all about delivering in the big moments, and Senegal goalkeeper Mendy’s failure to judge Frenkie de Jong’s cross for Gakpo’s goal cost his team a point. The Chelsea goalkeeper then played in a late Memphis Depay shot to give Davy Klaassen a second goal in stoppage time.

A second goal in injury time sealed victory for the Netherlands and Louis van Gaal’s side are on their way.

After the match: What the players and managers said

Netherlands head coach Louis van Gaal: “Frenkie de Jong? It wasn’t his best game but he provided the assist for the winning goal and that’s Frenkie de Jong. It was a very tough game for us.

– We didn’t have too many difficulties when the opponent was in possession, but I wasn’t happy with the ball possession on our side, we were inaccurate and ran with the ball too much.

Senegal: Aliou Cisse’s side next face Qatar on November 25 and then Ecuador on November 29, both must-win games if they hope to reach the knockouts.

The Netherlands: A winning start is just what the Dutch needed and they will play Ecuador next on November 25 followed by Qatar on November 29.

Arizona and Arizona State’s mascots FIGHT on the sidelines, while the Sun Devils score a touchdown